The Martyrdom of the Franciscans 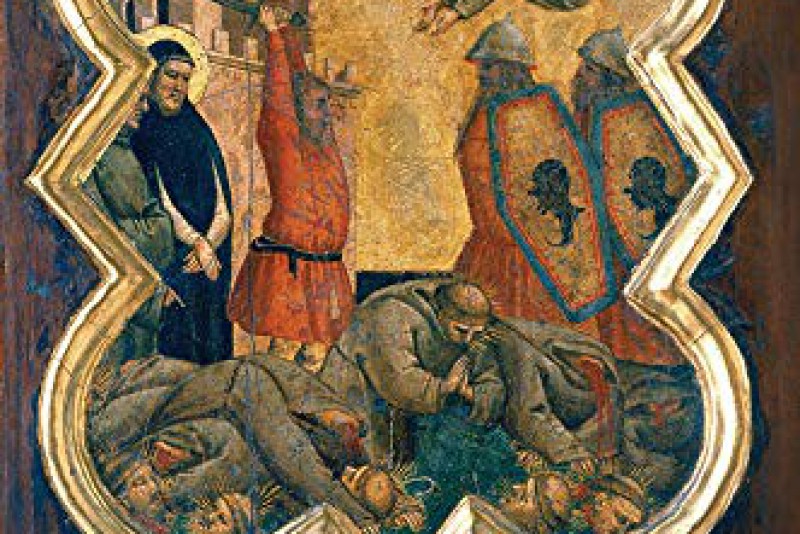 Christopher MacEvitt, The Martyrdom of the Franciscans: Islam, the Papacy, and an Order in Conflict (Philadelphia 2020).

While hagiographies tell of Christian martyrs who have died in an astonishing number of ways and places, slain by members of many different groups, martyrdom in a Franciscan context generally meant death at Muslim hands; indeed, in Franciscan discourse, "death by Saracen" came to rival or even surpass other definitions of what made a martyr. The centrality of Islam to Franciscan conceptions of martyrdom becomes even more apparent—and problematic—when we realize that many of the martyr narratives were largely invented. Franciscan authors were free to choose the antagonist they wanted, Christopher MacEvitt observes, and they almost always chose Muslims. However, martyrdom in Franciscan accounts rarely leads to conversion of the infidel, nor is it accompanied, as is so often the case in earlier hagiographical accounts, by any miraculous manifestation.

If the importance of preaching to infidels was written into the official Franciscan Rule of Order, the Order did not demonstrate much interest in conversion, and the primary efforts of friars in Muslim lands were devoted to preaching not to the native populations but to the Latin Christians—mercenaries, merchants, and captives—living there. Franciscan attitudes toward conversion and martyrdom changed dramatically in the beginning of the fourteenth century, however, when accounts of the martyrdom of four Franciscans said to have died while preaching in India were written. The speed with which the accounts of their martyrdom spread had less to do with the world beyond Christendom than with ecclesiastical affairs within, MacEvitt contends. The Martyrdom of the Franciscans shows how, for Franciscans, martyrdom accounts could at once offer veiled critique of papal policies toward the Order, a substitute for the rigorous pursuit of poverty, and a symbolic way to overcome Islam by denying Muslims the solace of conversion.