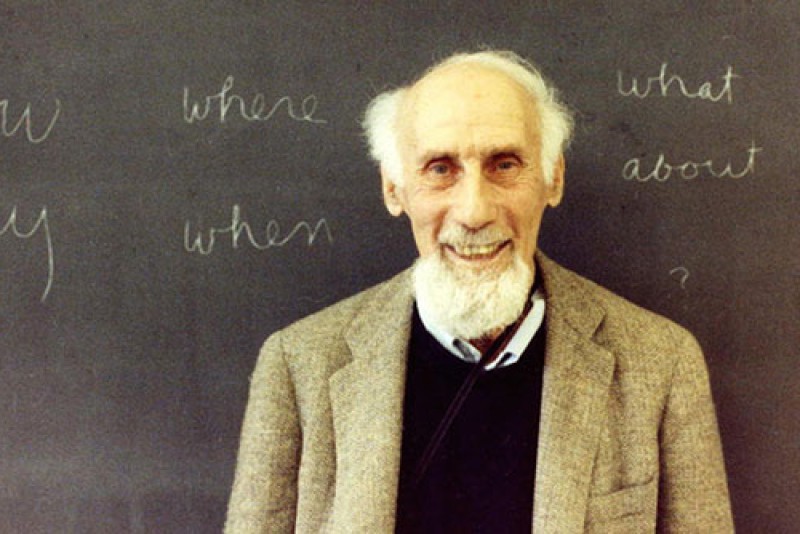 Some people are easily labeled. Their lives seem to be carefully organized and predictable. Robert Lax is not one of them. He wandered through life like he roamed the hills surrounding his home in Olean, New York, leaving to travel with the Cristiani family and their circus, study at Columbia University, and work in various jobs in New York City. Returning upstate, he became friends with many of the Franciscan friars at St. Bonaventure University, especially with Fr. Philotheus Boehner, who offered him an office where he could write, and spiritual guidance including discussions on writings by the saint Bonaventure. Fr. Philotheus and Robert got along well because they were soulmates. Both were committed to a simplicity of life and spirit along with maintaining his unique individuality. Robert later spent close to four decades living in Greece.

We humans must label, though. So Robert Lax is labeled a poet. He was, but most assuredly a minimalist. He was labeled a hermit, but never in the traditional sense. On the small island of Patmos he engaged with his neighbors and became their friend. He welcomed visits to his small and plain home, where his neighbors often heard loud laughter fill the air.

He was perhaps best described by friend Jack Kerouac, the Beat poet – an odd relationship that developed due in part to their shared desire to wander – as "the laughing Buddha." Kerouac also referred to Lax as "one of the great original voices of our times."

Lax was not as stern as he often appeared. He liked people, for whom he was always available.

He wrote numerous poems and drew countless pictures. Circus of the Sun is certainly his most popular work but The Peacemaker's Handbook is perhaps his most revelatory and mature. We will reflect upon it, while also looking at his most explicitly spiritual prose work 21Pages/Psalms, the Pages a dialogue with God, the latter a companion piece of his personal psalms. He proves himself to be the perfect "Jewish Catholic" as he labeled himself, though even that fluctuated. Yet he never renounced his birth religion nor his adopted one. In that, he was like many Jews in the days of the apostles.

Lax often wrote in columns, syllable pillars of sorts, compelling the reader to slow down and pay attention. He wanted his readers to savor the experience, being attentive not only to his words but to the empty, white space for readers to also engage. In this essay, for the sake of space, I will provide only two examples, one because the question is essential, the other because the notion of becoming a child is a recurring theme of Lax’s work. The other quotes from Handbook, will be presented in linear fashion.

In Peacemaker's Handbook he engages us in his process starting with a question:

List makers could fill pages with proclamations. Not Lax. In platonic fashion he responds, "know thyself."

Those two words are significant as the poet continues to reflect on peace:

"Once at peace with yourself you can bring peace to others."

Lax immediately gives us a reason why so much peacemaking fails whether in a family, a community, or even among nations. If we do not know ourselves and have not made peace with ourselves, we are in no position to engage in the difficult process of making peace because

"Peace is the atmosphere in which love can flourish."

Lax avoids pious or even mystical language. His religious outlook is beyond the categories that so frequently divide us. His outlook leads to an openness to everyone and everything. This requires an inner peace that comes from knowing ourselves. He seeks for himself and us

Not only is Lax the laughing Buddha, he is also the singing Buddha.

“Each word evokes a song."

That is, the inner experience is expressed first in a word, then in a song because

“a song is a work of art. Make an art of whatever you do."

For Lax, art provides us with a non-judgmental vision because art is an international "language" that can be spoken by anyone:

“Painter contributes by being a good painter. Needn't have peace for a theme."

How do we decide what it is we are called to do at any moment in our lives?

"Think we should always do what we want? Unless there's a good reason not to."

"If you know what you want to do & it doesn't harm you or anyone else, I'd say do it. If it does harm you or someone else, don't. Simple as that? That's how it looks to me."

He then offers some sage advice about seeking advice. He suggests seeking a wise advisor who lets you make your own decisions.

Lax never abandoned the child within. Like any child, he is not afraid to share who he is and what he wants.

so you can have multiple moments of magic, like Robert had: at the circus and throughout his life. He reveals himself as he is at any given moment. He may well have been thinking of the distinction that his longtime friend Thomas Merton made between the true self and the false selves we create to protect ourselves. Once we have embraced our true self, there is little fear in communicating who we are. Too often, though, the bossy self smothers the child within. After all, we want to act our age even if we act against Jesus's words: "Unless you become as little children...."

Robert not only builds pillar poems, he also loves to play with verbs. There are three interlaced but very different ones that we find in 21 Pages/Psalms as well as in Peacemaker's Handbook: waiting, watching and searching.

In 21 Pages he writes "I wait in the dark, in the rain. No sound but the rain, Waiting, not waiting, doing nothing but waiting." This is significant because of the introduction of the theme of darkness. Some interpret this as a dark night of the soul. I do not think so. Lax learned from St. Bonaventure's words near the end of The Soul's Journey into God: "The darkness is the light." As our eyes begin to adjust to darkness, we begin to see even in the darkness.

In the third section of Peacemaker's Handbook, the verb is not waiting but watching. Waiting is a passive experience, as we all know from waiting in long, tedious lines whether for a bus or an injection or sitting in a doctor's office, becoming almost mindless as minutes become hours. It's irritating. Watching, though, is an active experience. We watch for someone or something.

“Contemplation is watching. What happens if you watch? You begin to see."

But even Lax can take detours. He starts to search until he discovers,

“If I can't see You, it is because You are within me."

Yet the journey within is a labyrinth, which reminds us of the poem by Francis Thompson The Hound of Heaven which notes: "I fled Him down the labyrinthine ways of my own mind." Thompson reversed the search: it is God Who is chasing the soul which is frightened and so becomes a Jonas-like figure running away, but God pursues and catches up, saying "All that I took I did but take not for thy harms but just that thou might'st seek it in My arms."

In light of this, it might be wisest to avoid Lax's verbal conundrum, and simply agree that for Lax contemplation is "open-eyed," a term he himself uses in the Handbook. It is learning to see with our spiritual senses – another Bonaventurean insight – so we become attentive to where we are and what we are doing. Simone Weil would surely agree. She writes, "Attentiveness taken to its highest degree is the same thing as prayer. It presupposes faith and love...and it is a form of generosity."

Why then did Robert Lax settle in Patmos? There is a clue in the final section of the Handbook. He desired to turn the jungle into a garden. There is no doubt that we live in a jungle, globally, nationally, locally, and personally. We must never become complacent in any jungle. They are dangerous. Again Lax appeals:

“Like good children in the garden of Eden play lovingly & at peace."

So peace must first be pursued within yourself as you move from self-centeredness to creation-centered, as we seek nonviolent solutions to the problems of everyday life. Prophetically, Lax asks:

"Is it violent to eat an apple? Not if you plant the seeds."

With climate change and other threats to creation, we are learning how correct Lax was. Would that we would heed his words. If you are going to devour created goods, replace them. If we cut down a tree, we should at least plant a new one.

None of us wants to live in a jungle, but we throw up our hands feeling that the problem is so enormous there is nothing we can do. The Peacemaker's Handbook makes such a position a lie.

We must begin with ourselves, "start(ing) where you are." Robert Lax found his Eden when he breathed his first morning breath: "I wake praising, I wake singing."

Do we? Have we found our Eden? Do we even bother to look for it anymore?

Anthony M Carrozzo, OFM has spent much of his ministerial life in education, formation and retreat work. He was Director of The Francis Institute at St Bonaventure Univeristy where he became aware of the work of Robert Lax.