Francis of Assisi: A Patron Saint for Patients? 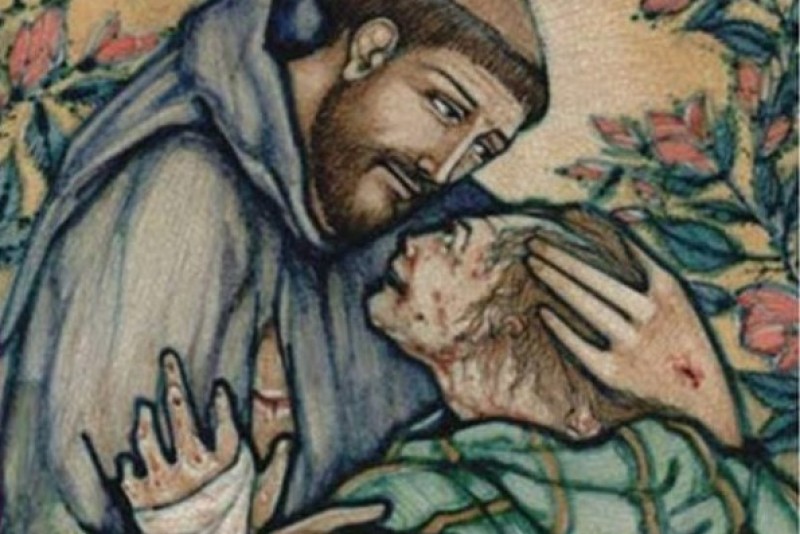 Francis of Assisi: A Patron Saint for Patients?

Nine centuries ago, as he himself endured horrific and ineffective medieval medical treatments, St. Francis of Assisi was credited with curing the sufferers of a disease that, like Covid-19, originated in animals. When that malady, rinderpest, leapt from bovines to humans it developed into what we know today as measles.

In 1224, the forty-third year of his life, a frail Francis of Assisi travelled painfully through the mountainous terrain of Umbria and Tuscany, resting at various hermitages, accompanied always by at least one of the few brothers that he trusted most. People along the way tried to reach Francis, or tear a swatch from his clothing, certain that he and whatever touched him had the power to heal. On one occasion, men from a village near Arezzo were inconsolable when they discovered that the man leading one of the borrowed animals back to its owner was not Francis. They regarded the holy man as the only hope for a woman who was in danger of death from an agonizing labor. The best the Lesser Brother could do was to give them the reins that Francis had held in his hands. The men hurried home and placed the gift on the suffering woman, who finally and safely gave birth (1 Cel 24:63).

People of the Middle Ages were considered old in their early forties, but while the average life span was about thirty-five years, some lived into their eighties. Francis had no such expectations. He knew that Brother Body was failing. He suffered fever, chills, and dropsy, which is a general swelling that was probably related to his damaged liver and spleen. Probably he suffered from some form of leprosy, such as tuberculoid.[1] Brother Eyes were a particular problem. Francis stumbled about even in rooms he knew well and bumped into doorways instead of passing through them. His vision of the world around him had grown cloudy and dim, but in memory he held one sight sharper than ever – that of a blind man led through Assisi by a little dog (2C 105:144).

Francis observed that his closest companions had aged with the passage of years under the strain of poverty but they still had more vigor than he. John of Lauds, who in his prime had been the strongest of men, retained the stamina to lift Francis up on a donkey’s back. The others could support him over rocky paths when he was unable to walk on his own. Francis, who had long recognized the need to give special consideration to ailing brothers, worried that caring for him taxed the strength of his companions, distracted them from prayer, and interfered with the daily life of their community. He told them that although he would not be able to repay them for their help, the Lord would find a way.[2]

Francis’s journey led south through mountains thick with oak and spiny holly shrubs toward Rieti. This city on the Velino River is located at the very middle of the Italian peninsula and was a center for the treatment of eye ailments. The ailing man’s journey was as painful emotionally for those who loved him as it was physically debilitating for Francis himself. Perhaps it was at this time at the cliff-side hermitage at Greccio that the falcon that typically awakened him in the middle of night for prayer changed its habits. In earlier years if Francis was slow to rise, the bird awakened him with its low insistent call and rustled in its nest until Francis was on his knees, but when Francis was ill, it let him sleep until light broke (2C 127:168).

At the hermitage of Fonte Colombo four miles southwest of Rieti, a leading physician came to examine him.[3] A man of his profession would have dressed in a red gown trimmed in squirrel fur, felt Francis’s pulse, and presented a large glass flask for Francis to fill with urine. Then, holding the sample to the light, he would have checked its cloudiness and consistency and observed the alarming build-up of other fluids in Francis’s body, particularly in one of his eyes. The physician said he would have to treat this by searing the cheek near Francis’s worst eye with a hot iron up to the eyebrow. A reluctant Francis was persuaded to allow the cauterization to proceed. A fire was lit and piled with logs until it grew into a roaring blaze hot enough to make the medical instrument, an iron rod, glow to a dull red. Francis entered the warm treatment room with several of his brothers and sat down, determined to be serene in the face of pain. But when he saw the fire rise and heard it gnaw and consume the logs and crackle with sparks, panic rose in his breast. Fire had been his friend and his companion, comforting him in cold, warning off menacing beasts during his nights in many forests. He had once told his brothers to show fire mercy and not beat at it too hard when it caught at his tunic and was burning his leg and so now he addressed it as a beloved ally: “Brother Fire, the Lord made you noble and useful among all creation. Be gentle to me in this hour because I have always loved you and will always do so for the love of the Lord who made you. I ask our common Creator to restrain your heat so that I may be able to endure it.” And with that, he blessed the flames ( 2C 125:166).

The brothers were in such terror that they had to flee the room because they could not bear to witness Francis’s pain. Hopefully he was given spongia soporifica, the anesthesia that had recently been introduced to Europe.[4] It was a solution of dissolved opium, mandrake, and hemlock juice soaked into a sponge and held under a patient’s nose in the hope of rendering them unconscious. Whether that balm was given to Francis or not, and whether it sedated him in any measure, when the hot metal seared his cheek, only the doctor was with him. Afterward his returning companions found Francis relaxed and possibly a bit giddy with relief that the ordeal was finally over. “Cowards!,” he said, “Men of little faith! Why did you run away?” He told them he had felt no pain, not even heat and he said that if the doctor had not burned enough, he was welcome to start again. The physician said that he had seen stronger men unable to tolerate such a searing but that Francis had not so much as twitched (2C 125:166). Nonetheless, this treatment did Francis no good. The doctors who had counseled against it were proven to be correct. His eye problems continued, aggravated by a bad burn that invited infection.

Francis could not effect a cure for himself but he continued to be revered as a miracle worker for others. The nearby village of Saint Eli had been stricken with cattle-plague, or the disease rinderpest, which was killing scores of cows and oxen. This viral affliction of hoofed animals could wipe out entire herds in a two-week span and, as scientists would discover in the twenty-first century, had already been transmitted to humans in the form of measles.[5] One villager had a vision that the water in which Francis washed his hands would save his animals.[6] Francis’s companions must have been well aware of the devastation of cattle-plague because they not only gave this supplicant what he asked for but they persuaded the unknowing Francis to wash his feet and they added this water to the gift. The man returned home and sprinkled the liquid on his ailing oxen who were said to quickly recover.

Francis was grateful for the doctor’s daily visits and one day as he was leaving told the guardian, the brother in charge of the Rieti community, to give him something delicious to eat. To Francis’s annoyance, the guardian said he was too embarrassed to invite him to share a meal because the hermitage was so poor and their pantry so meager. The physician, who had declined earlier invitations, broke the tension by replying that to him their poverty would be a delicacy. Thus, the brothers and their guest sat down to share a few cups of wine, some loaves of bread, and garden vegetables, but they were interrupted by a knock at the door. They found a woman at the entrance bearing a basket filled with fresh bread, fish, lobster pies, honey, and grapes, all sent by a noble woman who lived miles away. The brothers were astonished, but not the doctor. He told them, “Neither you nor any of us who live in the world understand as we should the sanctity of this man” (2C 14:44).

About the author: Kathleen Brady is completing a dual biography Francis and Clare: The Struggles of the Saints of Assisi. She is the author of Ida Tarbell Portrait of A Muckraker and Lucille the Life of Lucille Ball.